….Provides 50 Borehole Wells in 3 Counties – By: Augustine N. Myers – The provision of safe drinking water is not only a matter of concern to individuals and organizations in the Water, Sanitation and Hygiene (WASH)

sector in Liberia, but also the Embassy of the People’s Republic of China accredited near Monrovia. 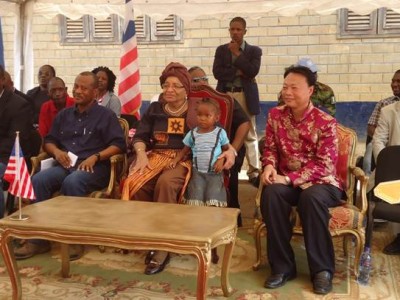 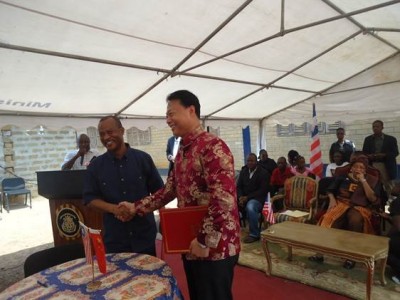 Exchange of a handshake between Chinese Ambassador to Liberia, Zhao Jianhua and Public 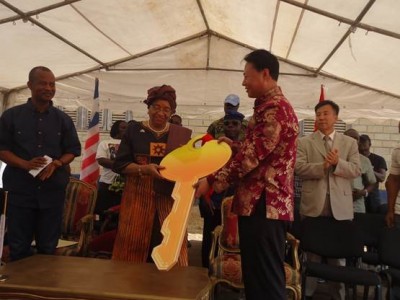 Chinese Ambassador to Liberia, Zhao Jianhua presents a symbolic key to President Ellen Johnson-Sirleaf to the 50 borehole wells, as Public Works Minister (left) and others look with smiles 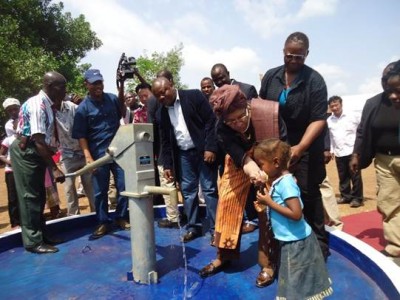 President Ellen Johnson-Sirleaf feeds a little girl with water, after officially dedicating the Mount Barclay Hand Pump, one of the 50 borehole wells sponsored by the Chinese Embassy in Monrovia

The concern of better WASH services including safe drinking water has now become a topical issue due to the level of attention given by the media on a daily basis.

The Liberian Media through the WASH Reporters & Editors Network of Liberia continues to infuse professionalism and dynamism in the coverage, reportage and advocacy of safe water, improved sanitation and hygiene facilities across the country.

This new style of robust WASH Media Journalism in Liberia continues to create a platform for intervention in the water, sanitation and hygiene sector of a country still recovering from year of devastating and destructive civil crisis.

The Chinese Embassy near Monrovia is the latest to respond, and has intervened in providing 50 hand pump wells for Liberians and foreign residents in 3 of Liberia’s 15 counties. They include Montserrado, Margibi and Bomi Counties.

In brief remarks during the dedicatoryceremony on the Campus of the Oluremi Tinubu Public School, President Sirleaf praised the Chinese Government for its assistance towards the growth and development of Liberia, something she noted could not be over emphasized.

She said the intervention by the People’s Republic of China through the Chinese Embassy is part of efforts to provide safe drinking water to all parts of the Country on a gradual basis.

She however admonished beneficiaries and the school administration to take good care of the facilities for longevity and good health.

The project is an Economic and Technical Corporation Agreement between the Government of Liberia and the People’s Republic of China at the cost of RME(CNY) 9,800.000.00 or USD$1,538,051.00.  Zhongmei Engineering Group Limited, a Contracting Firm was sourced by the Chinese Government through its embassy accredited near Monrovia to implement the project.

The Company, according to information provided by the Public Works Ministry has a proven track record of performance in the WASH Sector for more than ten (10) years in about five counties in Africa, including Kenya, Ghana, Zambia, Ethiopia and Togo.

The Technical Supervision was provided by the Ministry of Public Works.

Meanwhile, Public works Minister, Samuel Koffi Woods has assured President Sirleaf and community residents that the facilities would be visited periodically to ensure that the services are well managed.

Min. Wood also said the Ministry would work along with community residents and the administration of the Oluremi Tinubu Public School to relocate the pit latrine which was constructed closed to the School, noting that the location of the pit latrine was not conducive for the students and could make them vulnerable diseases.

For his part, the Principal of the Oluremi Tinubu Public school, Willam Siafia lauded government and the Chinese Embassy for the construction of the hand pump in the vicinity of the school, adding it would also be used by the entire community.

Speaking earlier, Chinese Ambassador to Liberia,  Zhao Jianhua informed President Sirleaf that his Country will continue to provide support to the people of Liberia in several areas  including water, sanitation, education and roads.

According to him, the need for safe drinking water across Liberia has become more apparent, as there are numerous of public outcries for good drinking water everywhere.

Amb. Zhao said constant information on the need for Liberians to have access to safe water cannot be over emphasized, something he admitted that attracted the involvement of the People’s Republic of China to assist in the provision of save drinking water.