By: Augustine N. Myers – The Government of Liberia seems to be exerting all efforts to increase the supply of

safe drinking water to the Nation’s Capital, “Monrovia” and its environs. 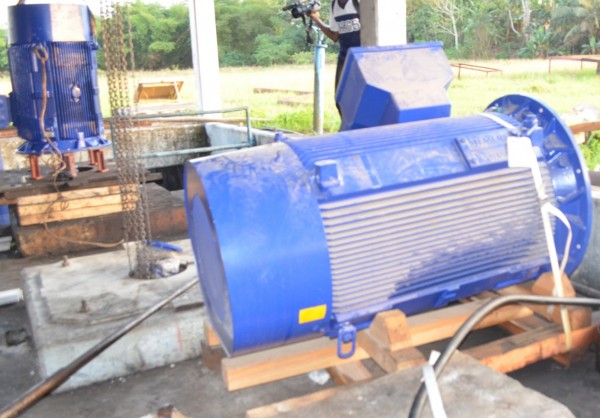 Residents of the city and surroundings are experiencing difficulties, especially during this try season in getting safe drinking water due to low supply.

Monrovia has a population estimated at 1.5 million people, nearly half the population of the entire country.

Ccurrently, Monrovia is receiving about 4.5 million gallons of water per day, a supply considered minimum for a growing population.

Prior to the Liberian civil crisis the City was receiving about 16 million gallons of water per day, with a population estimated at nearly eight hundred thousand (800,000).

The two new electric pumps now in the Country are intended to provide about 30 million gallons of safe water to the City and to bring relief to the huge population in Monrovia and surroundings.

The Liberian Government, through the Liberia Water and Sewer Corporation (LWSC) has brought into the country two new units of KSB 300-700 electric pumps.The pumps are currently been installed at the White Plains facilities in Crozierville, Montserrado County.

LWSC over the week-end led journalists on an inspection tour of the two electric pumps.

The inspection of the pumps, including a new 1.700 KVA generator and facilities was led by LWSC’s Board Chairman, Dr. Kimmie Weeks who expressed optimism that facilities at the White Plains will shortly be up to standard to serve residents in and around Monrovia.

Dr. Weeks however said LWSC needs about 2.7 million United States dollars to get the project operational.

According to him, contributions from the African Development Bank and other partners, the government of Liberia through LWSC will see the full functionality of the project to increase the provision of safe drinking water to the population.

The LWSC Board Chairman also stressed the need for the development of a long-term strategic plan. He said the plan will further prepare the entity to serve the population over a long-term basis more effectively.

Also briefing journalists during the tour of the facilities and inspection of the pumps and new generator, LWSC Deputy Managing Director for Technical Services, Frankie Nathaniel Cassell said the two pumps will increase water pressure to the 2 water lines serving Monrovia and other communities.

Mr. Cassell said the water lines are passing through the Pipeline and Caldwell communities, and that following the successful installation of the two new pumps there will be regular supply of safe water on a daily basis to the City.

Mr. Cassell told journalists that after the successful installation of the two new pumps, LWSC will pump about 30 million gallons of pipe-bone water to Monrovia and its surroundings per day.

The LWSC Deputy Managing Director for Technical Services also disclosed that the new generator consumes about 103 gallons of fuel per hour, something he described as very expensive because it will consume 2,472 gallons of fuel for a single day.

He said the 1.700 KVA or 1,300 kilowatts generator is the best machine that can smoothly operate the two new water pumps.

Mr. Cassell however said, the LWSC Management is currently negotiating with the Liberia Electricity Corporation (LEC) for the supply of electricity to the facilities in White Plaines.

He noted that once that was done, the new generator will be used as a stand-by.

The Management of the Liberia Water and Sewer Corporation (LWSC) has meanwhile set this month March for the installation of the two new water electric pumps, to be dedicated by the Good-will Ambassador for Water, Sanitation and Hygiene (WASH) in Africa, Liberian President Ellen Johnson-Sirleaf.

The arrival of the two electric water pumps comes ahead of the global celebration of World Water Day slated for the 22nd of March.