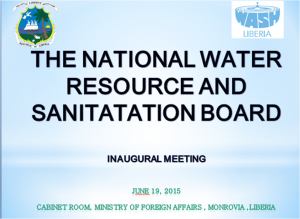 WHAT HAS HAPPENED?
A year after the inauguration of Her Excellency Madam Ellen Johnson-Sirleaf as President of the Republic of Liberia, the Government of Liberia desirous of addressing the fragmentation that has characterized water resources governance in the country; a situation further exacerbated by the prolonged years of conflict, the Cabinet developed, validated and approved the integrated water resources management policy in 2007. This process was spearheaded by Hon. Eugene Shannon the then Minister of Lands, Mines and Energy.

Relative to recommendations, the policy at the time called for the establishment of the national, county and district water resources and sanitation boards (NWRSB,CWRSB,DWRSB) as well as the village and community water and sanitation (WATSAN) committees. However, it suffices to clearly state that these recommendations for the most part have remained unimplemented to the detriment of the concerted efforts to bring an agreeable level of structure, system and orderliness to water resources and sanitation management in Liberia.

Still committed to bringing some level of sectorial governance to water, sanitation and hygiene sector, the Government once more through instrumentality of the Lands, Mines and Energy Ministry championed the drafting, validation and subsequent approval of the Water Supply, Sanitation and Hygiene Policy in April 2009. This important document following Cabinet validation and presidential approval again experienced implementation glitches for obvious reasons.

On the heels of these essential policy frameworks being put into place, the Water, sanitation and hygiene sector strategic plan (2012-2017) was also carved, endorsed by the cabinet and officially approved by the President. The Roosevelt Jayjay-led initiative proposed the re-establishment of the National Water Resources and Sanitation Board (NWRSB), national water, hygiene promotion committee (NWHPC) responsible for policy setting, the water and sanitation services commission (WSSC) as a regulator. For the Liberia Water and Sewer Corporation (LWSC), DCMHyP, rural water and sanitation services board (RWSSB) they were categorized as service providers.
After several calls by international and local actors in regards to the signing of the WASH Compact, Her Excellency President Ellen Johnson-Sirleaf finally signed the “Liberia WASH Compact” in May 2011. Truly a watershed moment in the drive to bring sanity to WASH sector as there now existed a clearly laid down roadmap leading to establishment of national institutions for a unified and coordinated approach to managing integrated water resources and equally associated issues of sanitation and hygiene. Consequentially, only the NWHPC got established and then mid last year the National Water Resources and Sanitation Board (NWRSB).
WHERE WE ARE?
In bringing sectorial governance, structure and system to the country’s WASH sector, we are at a very crucial juncture with the newly constituted board being the singular body with the power and authority to ensure the following worthwhile initiatives are undertaken:
 Develop and endorse a work plan for the remainder portion of the year;
 Propose an institutional framework for the eventual establishment of a Ministry of Water Resources and Environment in the country in line with international best practice;
 Recruit an institutional reform expert to guide the Board in achieving the deliverables for one year;
 Engage the WASH Donor Group ;
 In line with the role as sector regulator and ultimate governance body, communicate board existence to all partners implementing WASH in Liberia; and
 Host one-day board Retreat on the mandates and functions of the board- Orientation.

WHERE WE ARE HEADED?
 Practical steps including legislative enactments lead to creation of a Ministry of Water Resources and Environment in the country in line with international best practice and
 The full establishment of a Water Supply and Sanitation Commission (WSSC)